All, Plant Disease and Pests

Posted on by Aditi & Gautam

Powdery Mildew is a plant fungal disease that never fails to shock home gardeners. It shows up as a sudden emergence of white powdery spots on plant’s leaves, stems, and fruits that were otherwise healthy a day before.

It starts off as white spots appearing on the underside of the leaves, quickly spreading to the surface on top in a matter of a few hours. As the disease advances, the spots get bigger until every inch of the plant is covered in a white, powdery substance.

Flowering plants like zinnias, roses, dahlias, chrysanthemum, and sunflowers too can get infected. 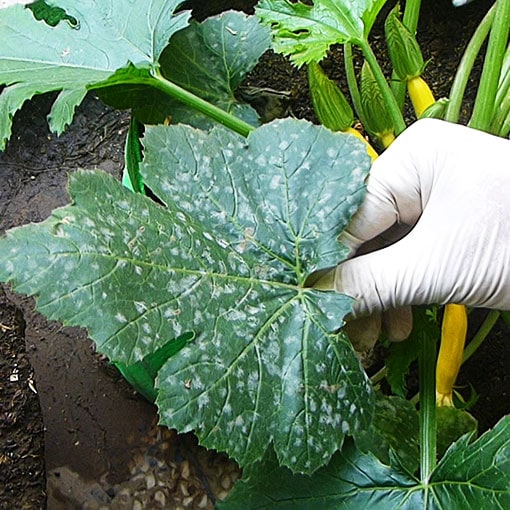 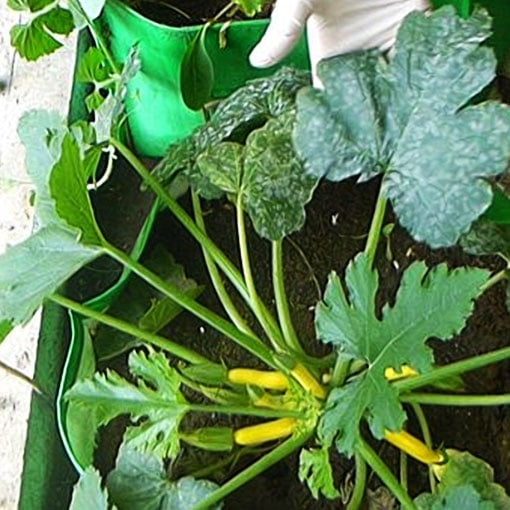 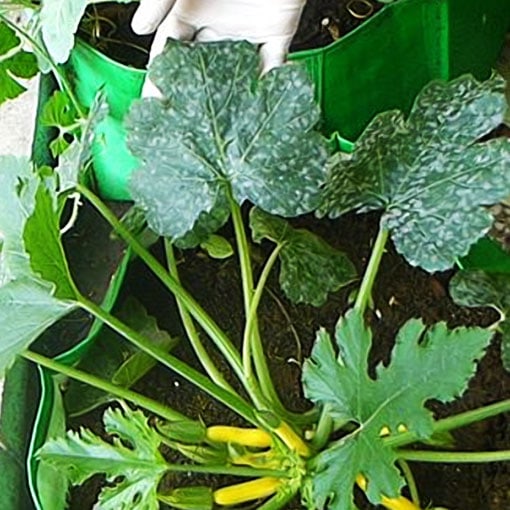 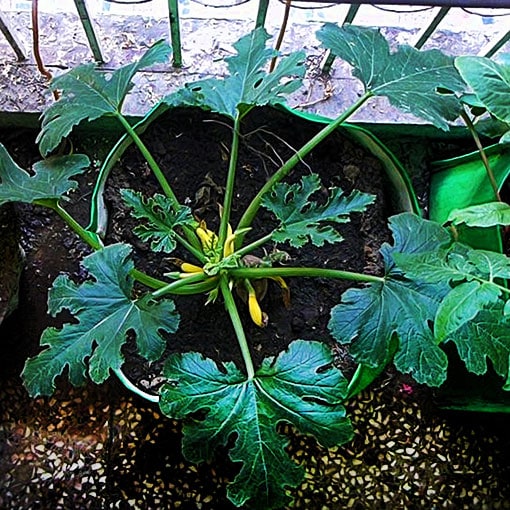 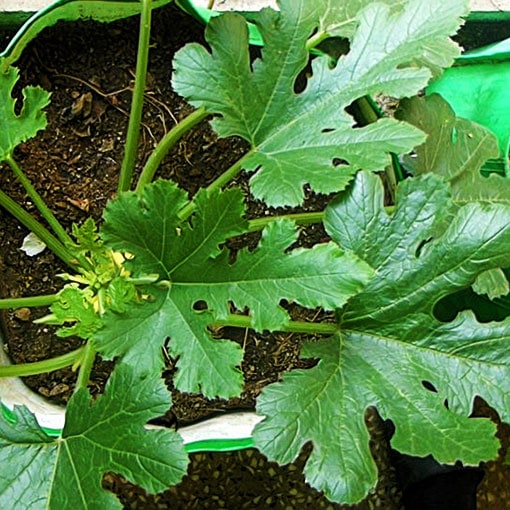 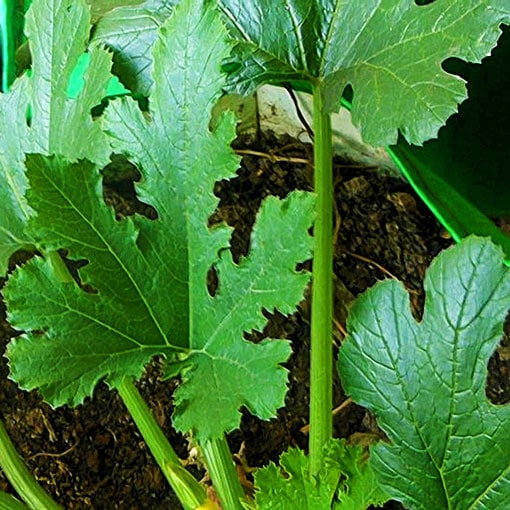 Different species of trees, shrubs, vines, flowers, fruits, grasses, field crops, and weeds get infected by different fungal spices spores. Which means that, if you have a cluster of Zucchini plants and one of them gets attacked by powdery mildew, the rest will be infected soon enough. But the good news is that since the spores are species specific, the attack will be contained to the zucchini plants and won’t spread to any other plant species.

Powdery Mildew disease is caused by the fungi spores already present in the organic debris. They start growing when the climate is sufficiently warm and dry. Fungi spores are microscopic, meaning that they can’t be seen by naked eyes. In some ways, they are like seeds, as they too remain dormant until they get the ideal conditions to germinate/reproduce. Once active, they multiply quickly. As they start multiplying, they travel to other plants and soil via wind, insects, and splashing of water.

Can Powdery Mildew Kill your plants?

Powdery mildew grows on the leaf’s surface, leaching the nutrients it requires from the leaf itself. Nutrients that would have otherwise fueled the plant’s growth are stolen. Leaves covered by it also cannot carry out photosynthesis, resulting in less formation of plant food.

If the disease remains untreated, a severe infection results in yellowing and distortion of leaves, flowers, fruits and buds.

In the advanced stage of the disease, you will see leaves wilting, branches in dieback, premature leaf drops, blemishes on fruits, and buds that won’t open.

Overall yield and quality of flowers and fruits deteriorate.s 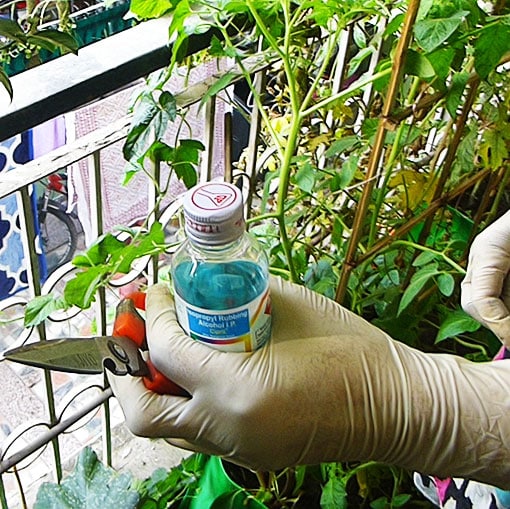 Clean the Cutter with Rubbing Alcohol 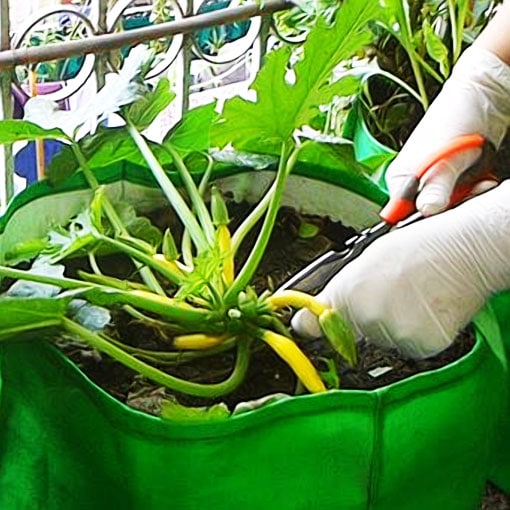 Remove all the Leaves close to stem 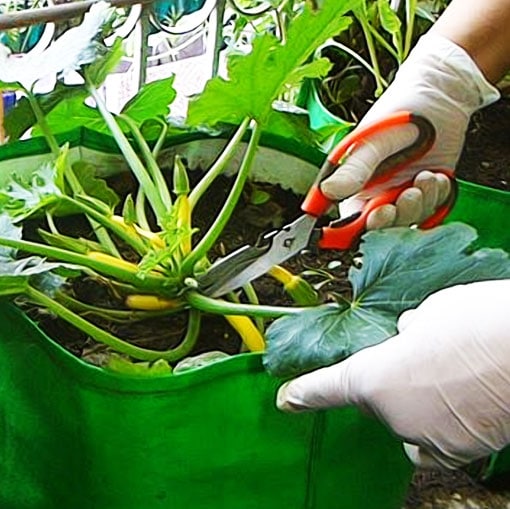 The saying: ‘Prevention is better than cure’ goes well with powdery mildew. There are certain preventive steps that can save our plants from this disease.

The same methods are used to remove and control its spread. These are cheap but effective home remedies that can control powdery mildew.

Though all the below given remedies are organic and safe, do test them out on a small portion of the plant and wait for 24 hours to ensure that there aren’t any adverse effects.

All spraying, except the milk spray, should be carried out early morning before sunrise or in the late evening after sunset to avoid plant sunburn.

I will be sharing four cheap organic remedies that only use things available in our homes and in the end, one remedy that is 100% free, to kill powdery mildew in plants.

Let’s check them out one by one. 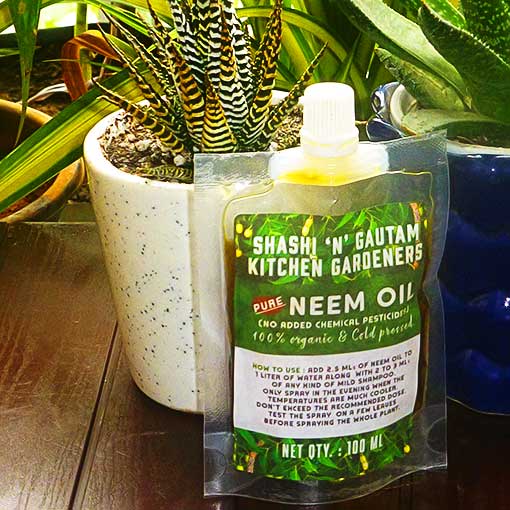 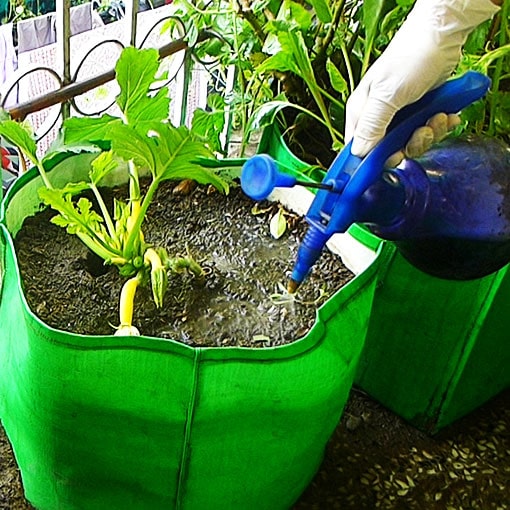 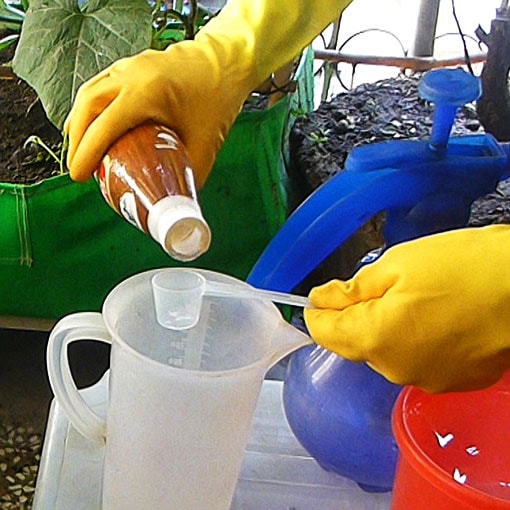 Neem oil is the only insecticide and pesticide we use when it comes to dealing with pests and diseases in our plants. It works wonderfully with powdery mildew too.

If we use it at the first sign of the disease, Neem Oil spray has the infection under control within a day’s time. You just have to completely drench the affected parts like leaves, stem while spraying for it to work. Spray on both sides of the leaves.

Repeat the spray every second or third day to fully remove the spores.

Once you get rid of powdery mildew completely, switch to weekly preventive spraying.

How to make Neem Oil Spray

Take a bottle and fill it with water. Add neem oil to it. The amount of oil to be added will depend on ppm of the oil being used. Follow the instructions given on the product label for the quantity to be added. Our Neem oil has ppm of up to 300. We add 2.5 ml per liter of water.

As water and oil do not mix, oil will float on the surface of the water at this point. 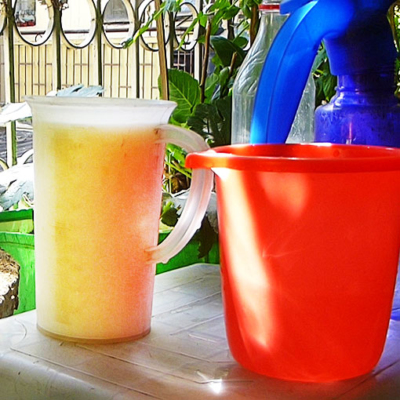 Lately milk has been gaining popularity among home gardeners for organic control of Powdery mildew. It is one of the easiest remedies and one that works too. You can see a host of YouTube channels claiming its effectiveness.

The science behind milk eradicating the disease hasn’t been explored/proved yet, but it has been theorized that the proteins and other compounds present in milk fight the infection and build plant immunity against it.

How to make the Milk Spray

Preferably use fresh cow milk which has been deemed to have more medicinal properties. Do not boil the milk.

The ratio of milk and water to be mixed is fixed as per the severity of the disease.

Milk percentage can be increased to 100%, meaning that milk can even be directly sprayed on the plant when the disease has advanced to a highly severe stage.

As with neem oil, fully drench both sides of the leaf and stem and other infected parts of the plant like new growth and bud.

Unlike most foliar sprays, milk spray should to be sprayed in direct sunlight. It has been theorized that the milk compounds interact with sunlight and become more effective in removing the powdery mildew.

Our advice is to do it in the morning when the sunlight is less harsh.

Get rid of Powdery Mildew with Baking Soda 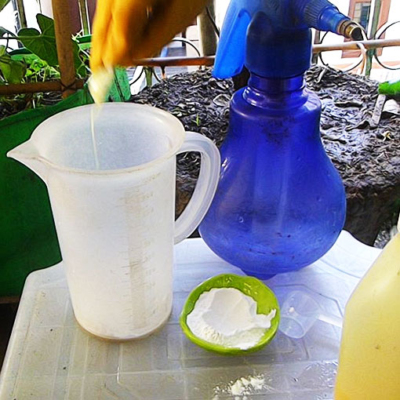 Another cheap organic home remedy for controlling Powdery Mildew is to use a Baking Soda mixture.

Spray the mixture on plant leaves to prevent onset of the disease and if the disease has already set in, to stop it from spreading.

Baking soda is highly alkaline, with a pH of 8.3. Spraying of baking soda mixture raises the leaf’s surface pH up to 8 which is more than ideal growing pH of fungi which is 7.

How to make Baking Soda Spray?

Cost per liter: Less than Rs1

Add half a tablespoon of baking soda and half a teaspoon of liquid soap to a liter of water. Mix it well and spray it liberally on the whole diseased plant.

Spray every 2- 3 days or as required.

If desired results are not visible, use Neem spray or milk spray for total control.

Baking soda works best as a preventive spray rather than one that removes the disease.

If you have encountered powdery mildew in your home garden in the past, you should do a weekly preventive spray. 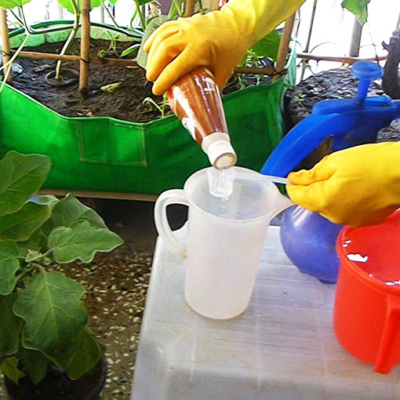 Vinegar is another cheap, easy to use organic home remedy for powdery mildew.

As opposed to baking soda, which fights the infection with alkalinity, Vinegar fights with acidity. It contains acetic acid and spraying it lowers the leaf’s surface pH, raising the acidity enough to kill off powdery mildew..

How to make the vinegar spray?

Cost per liter: Less than Rs5

The vinegar spray is acidic and can harm plants if not used in the right dilution. That is why we are mentioning it last and we recommend that you too only use it as a last resort when all else fails.

Want a way to treat powdery mildew without spending a penny? Move the plant to a place where it gets 8 or more hours of sunlight.

Powdery Mildew fungi spore grow when temperature is between 20 to 30° C. By placing the plant in the Sun, the temperature on the leaf surface will go beyond 30°C and kill fungi spores. 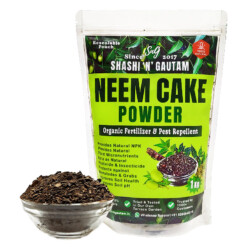 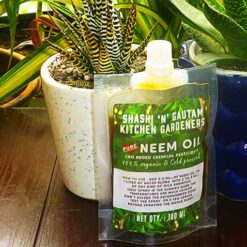 Our Range of Organic Trap & Insecticide